Now, before any of you hard-core modernists take issue with me calling something built after 1965 Mid-Century Modern, please note that I’m aware this is late mid-century. In 1973 a young west coast architect named Leon Bridges moved to Baltimore and built his family a residence that was an homage to his favorite architect Frank Lloyd Wright. You can see the west coast influence in the choice of red cedar for the exterior.

A view of the living room at 6101 Smith Ave. The home is nestled into the site rather than built on the cleared ground. There is no basement. In fact you enter the property by crossing a bridge over a stream. The proportions of the home showcase the natural scale of the land allowing trees to become view-points throughout the homes. The soaring ceiling and wall of windows is dramatic. 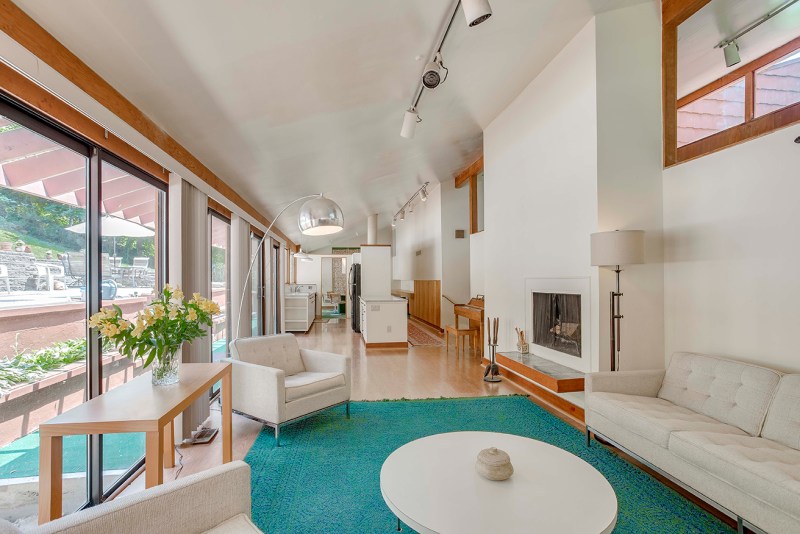 The family room has a wall of floor to ceiling windows (sliding glass doors) that look out onto the terrace – where you’ll find an oh so delightful swimming pool. The view of the roof line along the sliding glass doors is the classic mid-century low horizontal proportion. Note the mantle-less wood burning fireplace. This property has hosted a private event for the AIA society (American Institute of Architects)…. 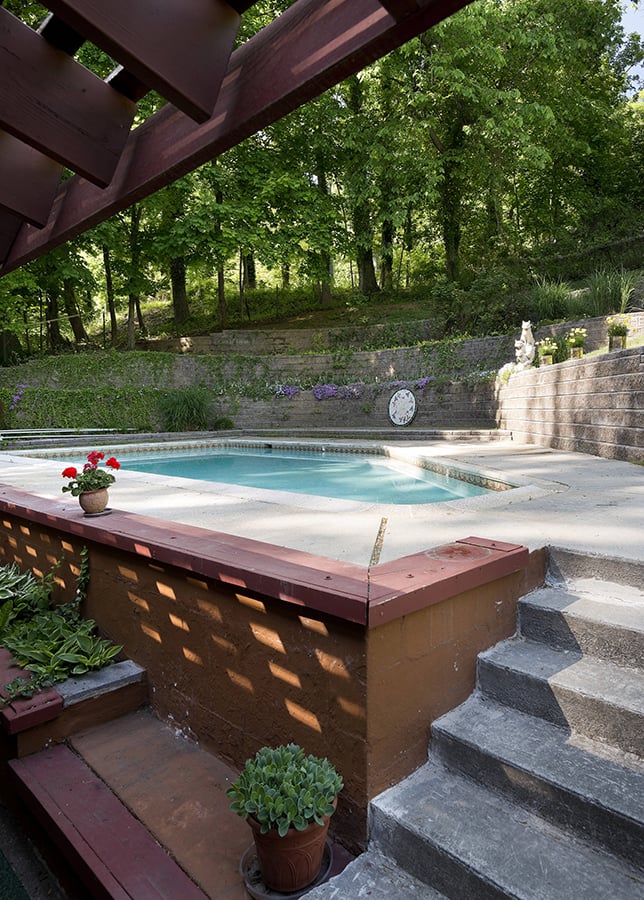 Lots of privacy to enjoy what’s effectively an outdoor living room. I’ve intentionally scheduled my first two open houses over Memorial Day weekend because even Realtors want to hang out by the pool when we can – we just end up working most weekends. 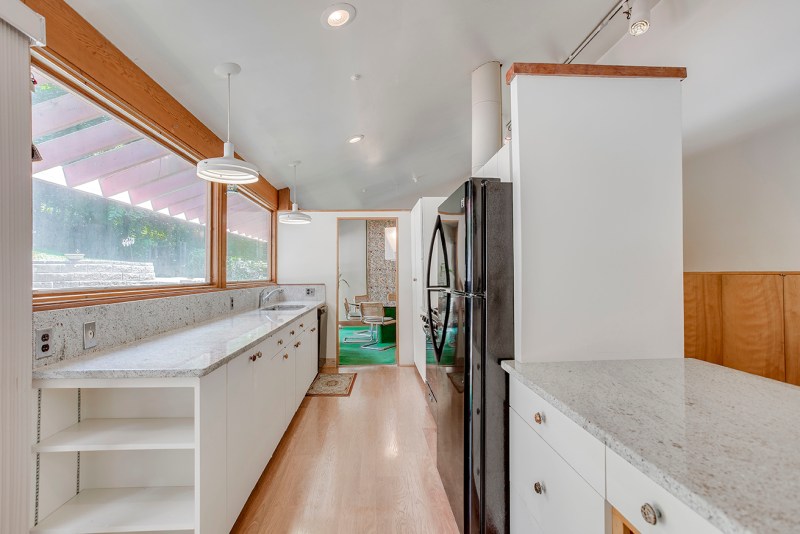 This image shows a view from the kitchen into the dining room, both of which are on the same level as the family room. In lieu of ornamentation, the architect lets the raw materials shine. From slate, to hardwoods, to cedar it all provides a rich experience. 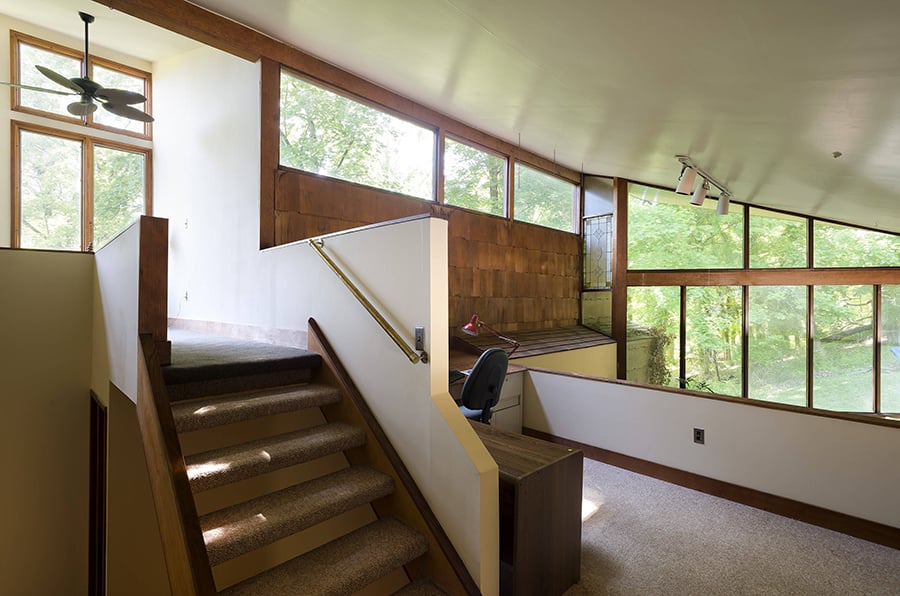 Natural light fills the property from every direction, although the home is officially oriented south. In the mid-century tradition, the architect owner has created spaces over the six split levels that meter the transition between private space and public space. You’ll never feel cramped in this home. This image shows a landing that’s used as an office / study nook. 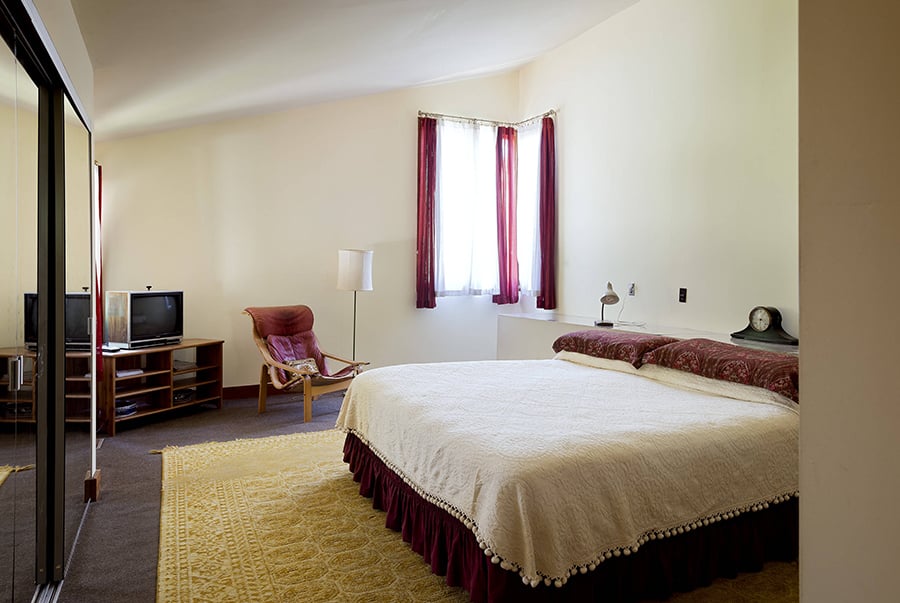 There are four large bedrooms at 6101 Smith Ave, and this images shows the master bedroom. All four bedrooms have a private en-suite bath. Three of the bedrooms include a sitting room. The value of these rooms being in c.1974 condition are that no one else but the architect has influenced the space. After forty-one years we’re now looking for the second owner. There is no horrible late 1980’s early 1990’s design to overcome. If you can’t appreciate a little 1970’s flavor, well baby you just ain’t funky. 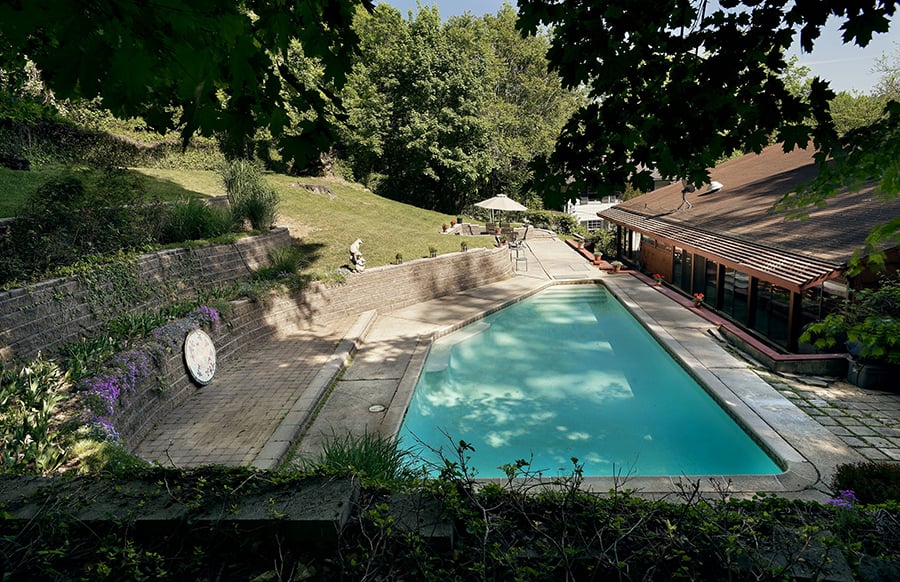 The important stuff has been updated, including the systems (we’re talking central air conditioning) and the roof which also has solar panels. This secluded image of the pool does not give any sense of the location, the property is actually a close proximity to the Mount Washington Village + Mount Washington Mill which features restaurants, offices, Starbucks coffee, and more. You could live here without a car.

The light rail is located at the bottom of the hill, and there is a sidewalk to lead you there. The closest grocery store is the Mount Washington Whole Foods. The highly acclaimed Mount Washington School (a public school) is also easy to reach on foot. Additionally some of Baltimore’s best private schools are within a short distance.

Mid-Century Residence for Sale in Mt. Washington, what a pleasure it is to sell an architect’s residence.

Tags: For Sale by guerilla